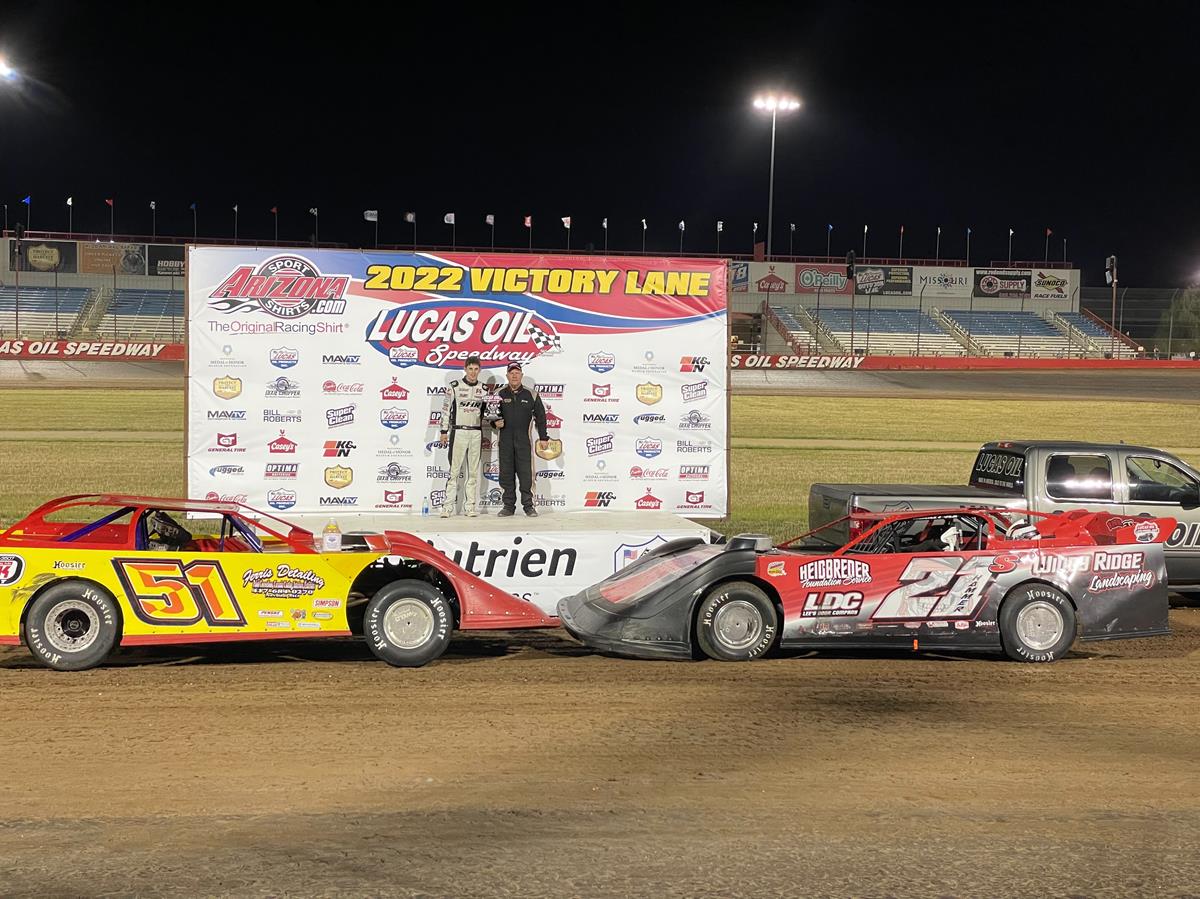 WHEATLAND, MO. (June 18, 2022) - Larry Ferris of Nevada scored a runaway victory Saturday night, but there was no separating he and Russellville's Cole Henson in the points battle as those two were crowned co-champ at Lucas Oil Speedway's Midseason Championships.

"It was kind of a Sunday drive, but it was fun," Ferris said of the feature win.

In other action as the Bolivar Herald-Free Press Presented the Midseason Championships along with KIX 105.7-Townsuare Media, Kris Jackson captured the Ozark Golf Cars USRA B-Mod feature and midseason title and Dillon McCowan had a similar sweep in the Cedar Creek Beef Jerky USRA Modifieds.

Ferris started on the pole and drove away to a 3.8-second lead just three laps into the feature, with Michael Maggard second and Henson in third. But a lap-four caution wiped out Ferris’ big, early cushion.

Henson got by Maggard on the restart, but as those two battled Ferris opened a 2.5-second lead in just two laps. That’s when another caution flew, leaving the leaders 14 laps to battle it out.

Ferris continued to show speed and had a 2.6-second lead by lap 10 and stretched it out from there. He finished a full straightaway in front of Henson with Maggard a distant third and Larry Jones in fourth.

"I'll tell you what, this is crazy," reigning track champion Henson said. "You get to battling for these points and man, you're sitting there and ... it gets crazy calculating all these things. But I want to say congrats to Larry.

"This is so fun to finish 1-2 like this and get some back-to-back wins. No matter at the end of the season, if I'm able to bring it home or if Larry brings it home I'd be happy to see Larry win this. I mean, we're pretty good buddies. Him and his family mean a lot to me.

"I'm gonna run him as hard as I can, but he had the Captial (Race Car) running tonight."

Added Ferris: "He's a great driver. It's like I told him last week, he impressed me with the way he ran that top for 20 laps. I don't think I could have done that. I was proud of him."

"It was fun," White said. "I saw (runner-up) David Hendrix running the top there, so I started going to the top on the straightaway. I'd like to thank all my sponsors on this car, plus my dad and my brother. Just everybody that helps me on this car."

Bryan White set the early pace with Hendrix moving into second by lap three as three early cautions plagued the rhythm of the feature.

Hendrix worked the high groove out of turn four to pass White at the flagstand to complete lap 11, but it was White regaining the top position the next time around with Hendrix second, Keller third and Beck in fourth.

White continued to lead it as the white flag appeared, but a caution for Mark Simon’s spin on the backstretch set up a green-white-checkered shootout. As White looked to finish off the win, Beck needed to protect his position to nail down the midseason points title.

Both were able to do that, with White taking the victory but winding up just three points behind Beck in the points battle. Beck posted his third top-five finish of the season.

"I cut it was too close there," Beck said. "I dug myself a hole in the heat race and I paid for it in the feature. But I guess we've been consistent all year and I found myself up in the front. I don't know how, but I done it."

It's all Jackson in B-Mods: With six Lucas Oil Speedway track championships already to his credit in the Ozark Golf Cars USRA B-Mod division, Lebanon’s Kris Jackson is halfway to earning No. 7.

Jackson started up front and led all 20 laps to picked up his third feature win of the season and nail down the B-Mod Midseason Championship. He outdistanced runner-up Ryan Gillmore by 3.5 seconds.

"It's been a pretty good year and it's flown by," Jackson said after notching win No. 13 overall in 2022. "I just want to say happy Father's Day to all the guys out there and and thank all my sponsors."

Jackson beat fellow front-row starter JC Morton to the lead as the green fell. He went on to build a two-second lead over a tightly bunched trio of Morton, Gillmore and Andy Bryant by lap eight when the first’s first caution stacked the field for a restart.

Gillmore, who began the night 13 points behind Jackson, got around Morton as action resumed and gave chase. But Jackson cruised away from there, getting through lapped traffic over the final four laps without incident.

Gillmore was second with Bryant edging past Morton on the final lap to earn third. Jon Sheets rounded out the top five.

“The car's been really good and the track has been phenomenal here this year," McCowan said. "I think this is the fastest track we've had since we started racing over here.

"I'd like to thank all my sponsors and everybody that helps me in the shop. It's been a long road to get where we're at today, but I wouldn't change it for the world."

McCowan took over the lead from Brill on lap 2 and never relinquished it. He sprinted to a 1.6-second lead by lap six over Dustin Hodges when the race’s first caution bunched the field.

It didn’t take McCowan long to open a comfortable margin as green-flag action resumed, needing only six laps to push the gap to 1.7 seconds. McCowan caught lapped traffic by lap 16, but got through it to prevail though Hodges was gaining at the end.

McCowan wound up an unofficial 114 points in front of Hodges for the midseason title.

Pro Bull Riding next week: Cars will take a week off from the dirt track and yield to a different kind of action next weekend as the Amped Up Pro Bull Tour returns. It's the Lucas Oil Pro Bull Riding Invitational Presented by ProtecttheHarvest.com on Friday and Saturday night in front of the main grandstand.