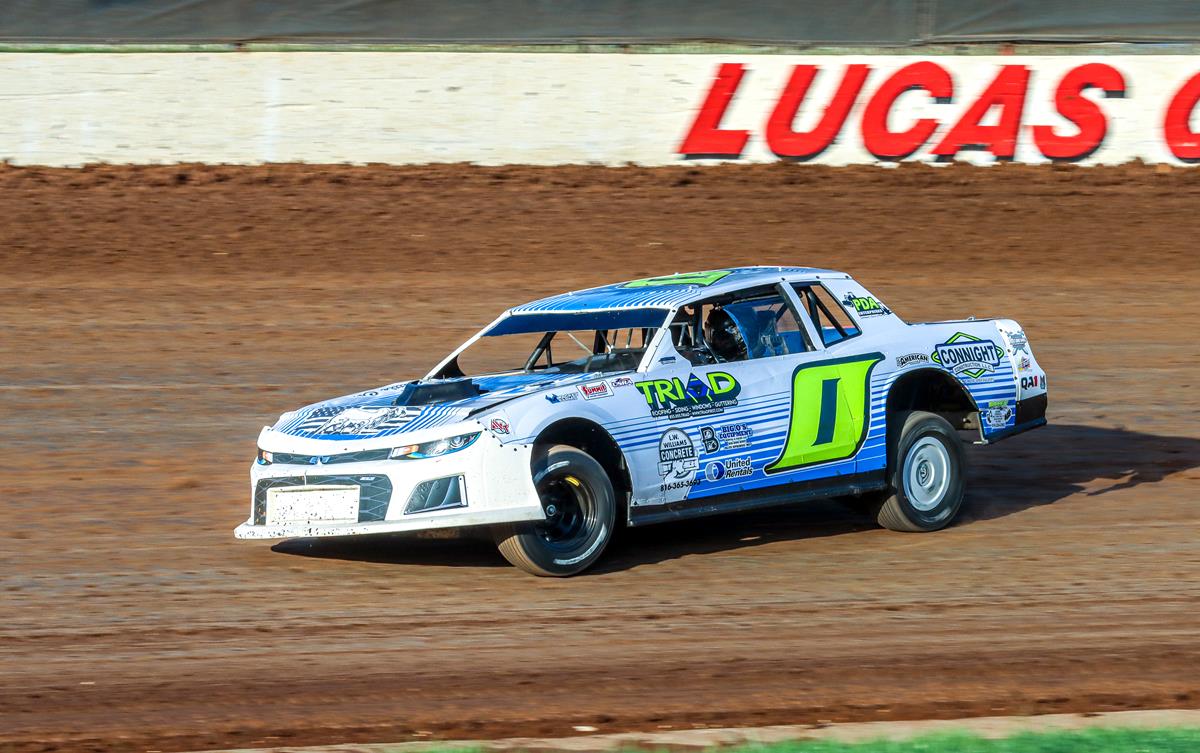 WHEATLAND, MO. (June 16, 2022) - Recent Skyline-Urbana High School graduate Mason Beck understands why a lot of kids grow up with a goal of driving dirt Late Models or aspiring for the highest level of NASCAR.

But the 19-year-old Beck said he is living out his dreams each weekend, behind the wheel of his USRA Stock Car.

“My goal was always to get into a Super Stock or Stock Car,” Beck said. “I like this full-body class, it’s real competitive, close. Everybody is real clean driving and it's fun.”

With a feature victory this season at Midway Speedway, Beck has yet to win at Lucas Oil Speedway but has been a mark of consistency. With finishes of second, third, sixth and seventh in the rapidly growing division, he has a 16-point lead over Lebanon’s Bryan White.

Beck also is third in USRA Stock Cars national rookie of the year standings. It’s all been a bit of a pleasant surprise for the young driver, who campaigned a Pure Stock in 2021.

“Overall, the season has gone a lot better than I expected,” Beck said. “With this being my first year in a Stock Car we didn’t think we’d be this successful this far along. Everything’s gone pretty smooth so far.”

Perhaps an omen of good things to come, Beck found victory lane at Lucas Oil Speedway last summer in a special guest appearance for the Pure Stock division. He said that win “was a huge deal for me. My dad (Phillip Beck) won the Wheatland Raceway points championship back in 2001 in that same car and 20 years later, to go back in that same car and win, it was kind of a big deal for him.”

Phillip Beck was a regular at the Wheatland Raceway in the years before it became Lucas Oil Speedway. How that particular car found its way back to victory lane there - or made it back to the track at all - is pretty amazing.

When he turned 15, Mason kept bugging his dad about getting a Pure Stock to go racing. He said they found Phillip’s old car out in the woods near the family’s home and had to cut down several trees to retrieve the vehicle.

“The frame and roll cage was all it was. Basically had to build it from the ground up,” Mason Beck said. “We got it down when I turned 16 and started racing at Dallas County and when they had special Pure Stock specials at Lucas. We went to Midway and that’s how we got started from there.”

Mason said his dad and his uncle Jerry Glor shared the car back in the day, with Glor racing it on Friday nights at Dallas County and Phillip on Saturday at Wheatland. Now his dad is serving as his mechanic and crew chief.

The move from Pure Stocks into the Stock Car division began near the end of last season when Mason got to test a Stock Car for someone looking for a prospective driver. And that’s how he has wound up driving the current car for Ethan Mackey.

“They may not be the fastest or most-desirable car to drive,” Beck said of the Stock Car class, which attracted a season-high 29 entries to Lucas Oil Speedway last week. “But with the rules and everything, they are the most-even, closest racing that you’re going to get.”

Beck, who played football and basketball in high school, said he’s still learning as he seeks his first feature win in the car at Lucas Oil Speedway.

“We went to Midway and it was our third or fourth race and we won there,” he said. “We’ve been close at Urbana, Butler and Lucas, we just haven’t got the car completely figured out. I’m still getting seat time and learning what it will do in certain situations.”

Round 3 of the Kids' Power Wheel races are scheduled during intermission on the front straightaway. Youngsters ages 3-9 can enter their own battery-powered Power Wheel cars by signing up for the Frogs Jr. Fan Club on the south end of the Midway prior to the races.

Father's Day recliner giveaway: For Father's Day Weekend, Saturday night also marks the annual recliner giveaway Presented by Scott’s Furniture of Osceola.
Fathers can sign up at the Protect the Harvest table and a winning name will be drawn during intermission. You must be present to win.