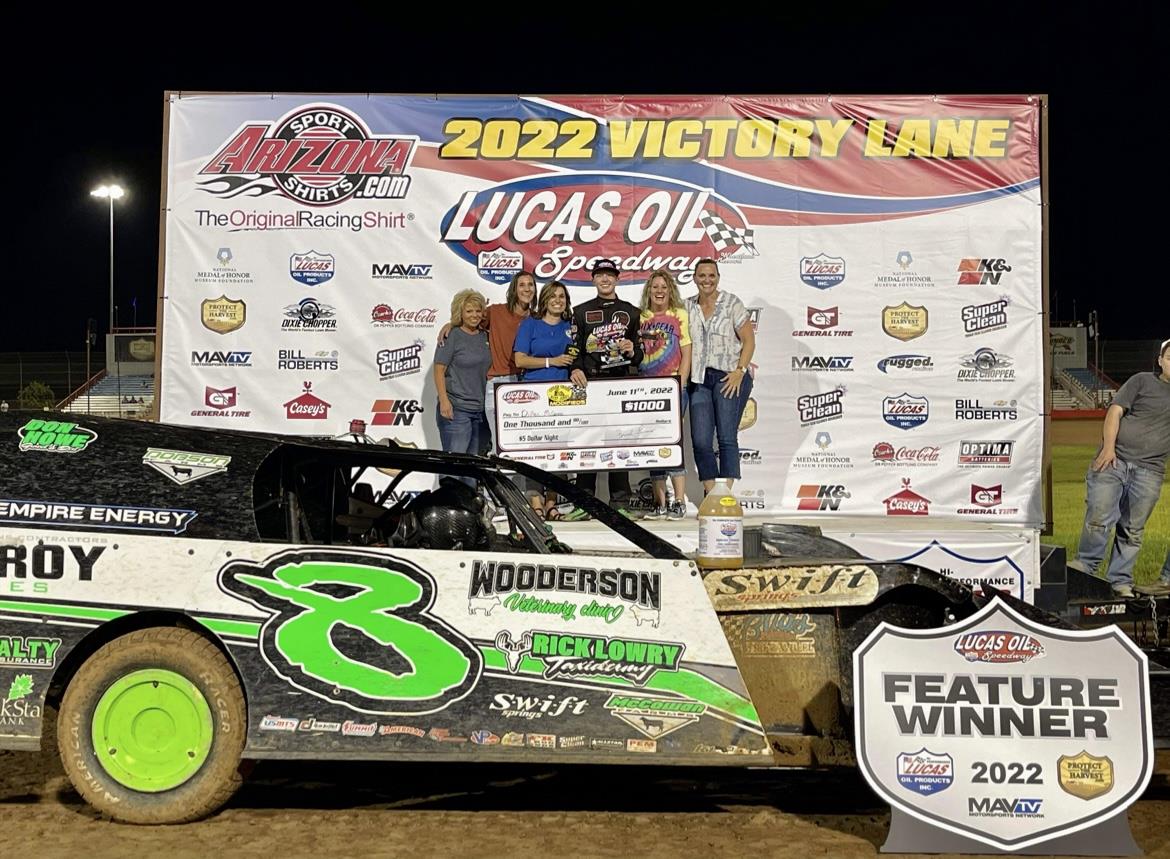 WHEATLAND, MO. (June 11, 2022) - Some wins are more exciting than others and Dillon McCowan enjoyed one of his most thrilling feature victories so far at Lucas Oil Speedway on Saturday night.

McCowan drove from a 14th-starting position all the way to the front to capture the $1,000 Cedar Creek Beef Jerky USRA Modified feature victory to headline the Big Adventure RV Weekly Racing Series program.

McCowan, of Urbana, beat Nick Bidinger by a car length for his fifth feature victory of the season and further expand his points lead in defense of his track championship.

The 18-year-old McCowan had an unusually poor seventh-place run in his heat race to leave him seemingly buried deep in the field as the 25-lap feature went green.

"I want to say a special shout-out to my grandpa. He's not been here in a while and this is one of the more special ones because he got to be here and we came from the back," McCowan said.

Bidinger sprinted away from his pole-starting position to the lead and he had opened up a 2.9-second lead by lap seven over Dustin Hodges when the race’s first caution appeared.

Meanwhile, McCowan continued his charge through the field as the race returned to green as he moved into third by lap 10 behind Bidinger and Hodges.

McCowan passed Hodges on lap 15 and set his sights on the leader, whom he still trailed by 1.7 seconds with 10 laps remaining.

Continuing to use the high groove, McCowan closed to the back bumper of Bidinger on lap 21 as the duo entered lapped traffic. He split the two slower cars to take the lead coming to the start-finish line to complete lap 23.

Bidinger made a last-lap bid, but McCowan took the checkers by navigating one more lapped car coming out of turn four.

"It was definitely hectic," McCowan said of the win. "It got intense there when we hit lapped traffic and I didn't know if I was gonna fit through those two on the front stretch. We did and (Bidinger) was really good.

The former Lucas Oil Speedway Late Model track champion edged out Brown by .027 seconds at the finish line - just after Brown had led at the white-flag by a similar, micro margin. It was Fennewald’s first USRA Stock Cars win of the season.

Fennewald said his motor was running hot in the later stages of the race, which caused some extra worry.

“Lap 14, I was running about 245, 250 (degrees) and I could tell it was not good. It was starting to miss and cut out,” Fennewald said. “I was like if I don’t run it off in there keep it straight and run it in there like I do that Late Model, I was gonna lose.

“I’ll tell you what, I gave her hell on that last lap. I was just letting her eat.”

Front-row starter Brown led the first three laps before Fennewald, a three-time Late Model track champion, went around him on the high side in turns three and four to grab the lead to complete lap 4.

Fennewald drove away to a two-second lead by lap 11 over Ed Griggs with Brown slipping to third. By lap 14, the lead with 1.4 seconds, but that was erased with the fourth caution of the race, leading to a restart with six to go.

On the restart, Brown moved into second and Griggs pulled into the pits. Brown went into the lead out of turn four on lap 16, but Fennewald battled back on the outside and reclaimed the lead the next time around. That set the stage for the finish, with the two side by side the entire time before Fennewald was able to prevail.

Henson earns Late Model win: Cole Henson of Russellville finally put away Larry Ferris late in the Hermitage Lumber Late Model feature after the two staged a duel most of the way.

Henson scored his second feature win in three events this season, beating Ferris by 2.2 seconds in a race that was much more competitive than the final margin.

"I was watching him down there every time I would go in (to a corner) high. He was barreling in down low," Henson said of Ferris. "Then I was trying to watch the (video board) back here. I had too much going on to watch. I should have just focused on driving.

"But everything worked out great. Man, this humidity has these motors running hot. We got a little warmer than we wanted to out there, but it all worked out."

Henson and Ferris wasted little time separating from the field with Henson hanging on to a narrow lead through the first half of the 20-lapper.

Henson kept working the high side with Ferris in the low groove, never separated by more than a car length until they reached lapped traffic on lap 14.

That allowed Henson to get about a six-car-length cushion that became about double that by lap 17. The two-time-defending track champ gradually pulled away rom there, outdistancing Ferris in the caution-free race.

JC Morton was a distant third with Michael Maggard fourth and Tucker Cox in fifth.

Turner won for the 11th time this season at his sixth different track. It was his first win at Lucas Oil Speedway.

"All the credit goes to these guys," Turner said of his crew and car owners in victory lane. "J2 Race Cars, Kris (Jackson) helps a ton and without him it wouldn't be possible."

Turner passed JC Morton on the outside coming out of turn four to lap nine to grab the lead. He was able to stretch it to 1.4 seconds by lap 16 when a caution bunched the field.

That left four laps to the finish with Gabriel Hodges in third and Ryan Gillmore in fourth behind the due up front.

Turner held on from there and to beat Morton by 1.3 seconds at the finish. Gillmore finished a few feet behind Morton for the runner-up spot, with Hodges fourth and JC Newell fifth.

Defending and six-time track champion Kris Jackson rallied to finish eighth after a flat tire on the opening lap put him at the back of the 24-car field for a restart.

Drag Boats continue on Sunday: The Kentucky Drag Boat Association Spring Opener on Lake Lucas concludes its three-day event with eliminations on Sunday starting at 9 a.m. with gates opening at 8 a.m. Drag boat teams and fans can visit KDBA.net for more information on the series.