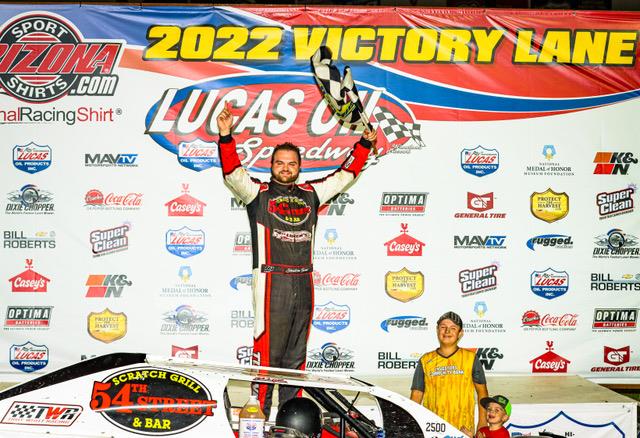 WHEATLAND, MO. (Sept. 28, 2022) - Reviewing his 2022 results before the upcoming biggest week of the season, the 9th annual Summit USRA Nationals, Shadren Turner has plenty to feel good about regardless of what happens the rest of the way.

“It’s been amazing, really,” Turner said of 28 feature victories and a second-place standing in USRA B-Mod national points headed into the week-long extravaganza that begins with practice on Monday at Lucas Oil Speedway.

Turner, a 24-year-old from St. Joseph, is 49 points behind Joe Chisholm of Osage, Iowa. It’s easily been Turner’s best season to date, more than double his previous season best of 11 feature wins in 2021.

“We’ve won at 11 different tracks this year. That’s where we have our most fun, seeing different places and enjoying different competition every week,” Turner said.

Turner credits his success to an affiliation with car owner Troy Whitt and a new J2 Race car the team debuted this year. The consistency has been phenomenal, with 38 top-five finishes in 59 events.

“This is my first full year of driving for Troy Whitt. He owns everything and his son, Jeffrey Whitt and his wife, Lori Whitt, and their nephew Andrew Long make up a team with me and my dad,” Turner said. “They do all the work and put me in really, really good equipment.

“I’m lucky this year to just show up and drive the absolute best stuff possible. They’ve gone above and beyond. The combination of having some really good car owners like them and we have a J2 Race Car built by Kris and Tony Jackson. That has been amazing as well.

“That combination has helped me have a complete dream season that I never would have imagined. It’s definitely been awesome.”

Turner said he got to know Troy Whitt the last couple of years through his relationship with Kris Jackson. When Whitt made it known he was looking for a quality driver to put in his car, Jackson got in touch with Turner and recommended he pursue the opportunity.

The rest, as they say, has been history. Ironically, some of Turner’s toughest competition has been Jackson when the two have been at common events.

“It’s tough to beat Kris, no matter what,” Turner said. “But one thing about Kris that I really admire about him, I truly think he wants as much success for his customers as for himself. We’ve been lucky enough to be able to beat him a few times this year. Obviously he’s beat us, like he has everybody else.

“We work really good together. Whoever does better between us or any of his other customers, he seems to be really happy and we are too if somebody from the J2 team can get up there and win. I don’t think I would be running as good as Kris, or being competitive with him, if it wasn’t for Kris himself. He’s been a huge part of my success.”

Turner began racing as a five-year-old in go-karts. He got into his first B-Mod at the age of 13 and has continued to evolve from there. He credits his dad, Mark Turner, for putting him on the early road to success. Mark Turner drove Modifieds for a brief time when Shadren was young.

“He only raced 3-5 years,” Turner said. “That’s where I fell in love with it, being there with him. Whenever I became old enough to get into go-karts, dad stopped racing himself and got me going. He’s definitely sacrificed a lot over the years to let me race.

“My first year (in B-Mods) was at Valley Speedway, the only track at the time that would allow me to race at 13. My closest tracks are Lakeside and I-35. Those two are where I have the most laps. It kind of progressed from where we stayed around those two places the first few years and after that did a little more traveling.

“Now that we have (the Whitts), I’ve been able to go all kinds of places.”

Whether or not he’s able to overtake Chisholm in the USRA championship battle, Turner said winning the USRA Nationals final-night feature would be a career highlight if they can make it happen. The team already has one feature win at Lucas Oil Speedway this season, on June 11.

“We’ve won some pretty big races in our eyes this year, but like anything you want to keep doing bigger and bigger things,” Turner said. “To win the USRA Nationals would be the biggest win of my career, if we could pull that off.”

The Summit USRA Nationals will feature action in eight different divisions under the United States Racing Association banner. The marathon event begins its six-night run on Monday with a practice night from 6-10 p.m. Racing in some, but not all of the classes, will begin the following night and go through the big finale on the final night.

The Summit Shootout also returns this year and will take place on Tuesday, Wednesday and Thursday and feature USRA track champions and Summit Shootout qualifying race winners to compete in this one-of-a-kind battle for Modified, Stock Car, B-Mod and Hobby Stock competitors.

Drivers who have not yet entered can register online at MyRacePass for the 2022 event. Visit USRAracing.com for news stories, point standings and other archived information about the USRA.