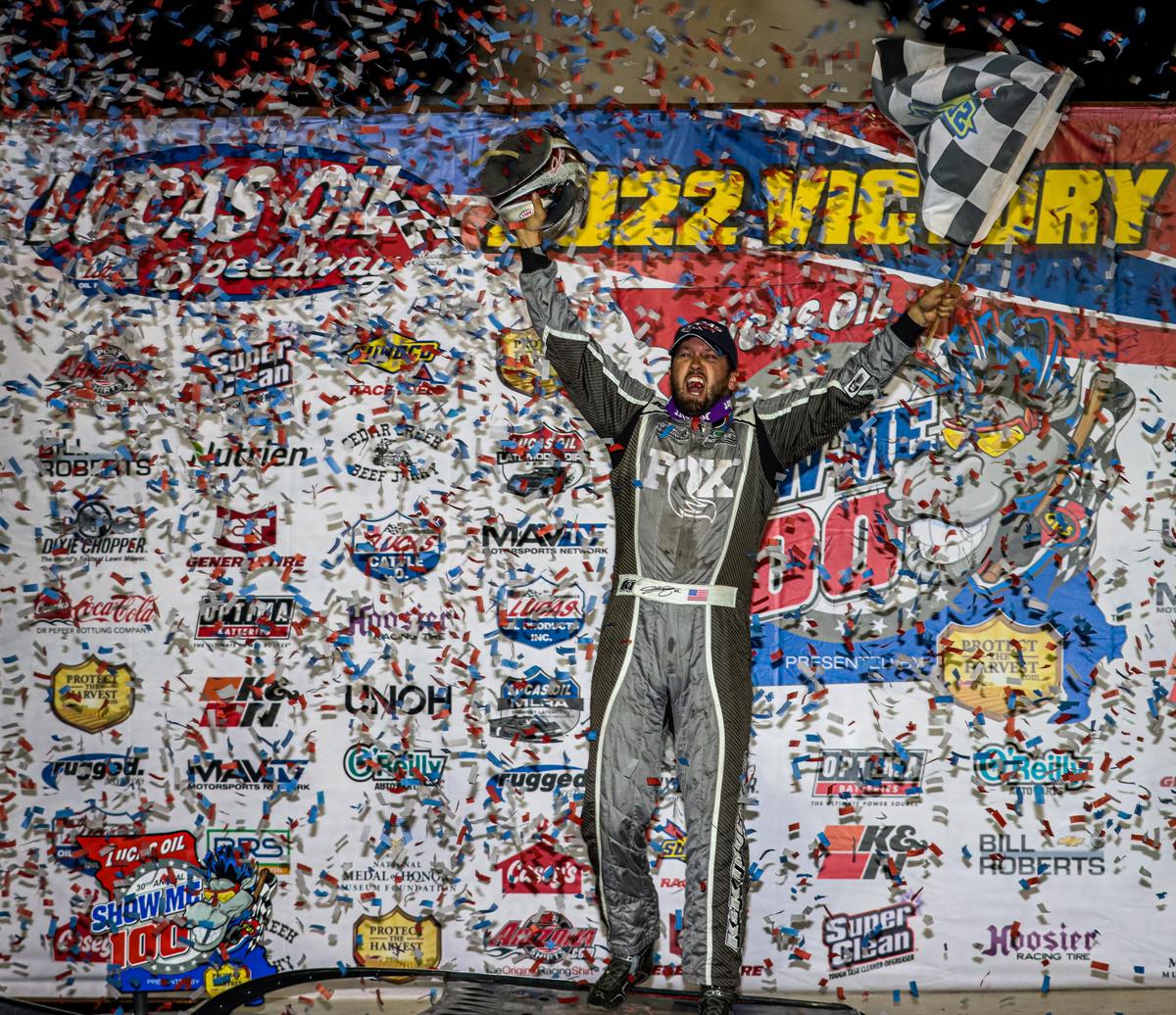 Ferguson, of Mount Holly, North Carolina, grabbed the lead from Jonathan Davenport with 12 laps remaining and went on to capture the 30th annual Show-Me 100 Presented by ProtecttheHarvest.com.

"Oh man, I don't know what to say. I'm speechless," Ferguson said in victory lane after the Lucas Oil Late Model Dirt Series win, in front of an estimated 8,000 fans. "God is so great. He put me in this situation. That was awesome. This is amazing and I'm so thankful to be here."

The 32-year-old Ferguson, who captured the 2020 Diamond Nationals in his first visit to Lucas Oil Speedway, became the 18th different winner of the Show-Me 100. He earned a race-record $50,000 by finishing 3.04 seconds in front of runner-up Ricky Thornton Jr. Third place went to Tim McCreadie and four-time Show-Me 100 winner Jimmy Owens finished fourth.

Ferguson started 10th and was able to work his way into contention by the midway point and advanced to third by lap 75. Davenport had dominated most of the way, leading all but eight of the first 87 laps as Ferguson closed in on him coming off turn two on lap 88.

Pulling just in front off the turn, Ferguson had to check up for the lapped car of Earl Pearson Jr. Davenport and Ferguson went into turn three side by side, but as the leaders cleared Pearson, they made contact.

Ferguson was able to keep his car pointed straight and Davenport, the 2015 Show-Me 100 winner, spun and had to go to the rear for the restart and his chances dashed. Davenport wound up finishing 16th.

"J.D. kind of got stuck behind the lapped cars there," Ferguson said of the preceding laps leading into the key moment. "I found a groove about a half-car out from everybody else and rolled him in (turns) one and two. I got door-to-door with him.

"I kind of picked up Earl down the backstretch and let him know I was there. He went down and I rolled to the outside of him and I think me and J.D. just kind of got in hot and we hit a little bit.

"It knocked the steering wheel out of my hand and I was able to grab it back and keep the lead. I guess he didn't make out so well. I hate it for him. I think we might have had a little better car than him, but it was a heck of a battle. It's fun when it comes down to the end like that."

As the leaders battled heavy lapped traffic, Owens slipped by Scott for second. Meanwhile, Davenport built up a 3.7-second lead over Owens by lap 24 when the race’s first caution flag flew due to Kolby Vandenbergh’s spin in turn four.

With a clear track ahead of him, Davenport blazed away after the restart and needed only five laps to built a 3.1-second command over Owens with Hudson O’Neal moving into third. Bobby Pearce, who started 14th, advanced into fourth by lap 37 behind Davenport, O’Neal and Owens with the top four all being former Show-Me 100 winners.

Davenport’s lead was 3.6 seconds over O’Neal when action slowed on lap 44 for the second caution. Pearce was running third with Owens fourth and Ricky Thornton Jr. fifth.

But Pearce suddenly pulled off the track on lap 48 while battling among the top four, ending victory hopes for the 2017 race winner.

As the race hit the midpoint, Davenport held a two-second lead over Thornton with O’Neal third and Owens in fourth. With those behind him gaining ground on the bottom groove, Davenport’s lead over Thornton was down to less than a half second by lap 58. Running in lapped traffic, Davenport lost the lead on lap 63 as Thornton moved by coming out of turn four.

Thornton and Davenport were side-by-side when Davenport reclaimed the top spot on lap 67 with Ferguson close behind in third and McCreadie having advanced from 17th at the start to fourth.

Davenport rebuilt his lead to 1.7 seconds by lap 80, as Ferguson had moved into second. It was about that time that Ferguson began whittling into the margin to set up the drama of lap 88 that would decide the outcome.

Ferguson drove away the restart for Davenport's spin and opened a 2.1-second lead by lap 95. Without lapped traffic to contend with, he beat Thornton by just over three seconds seconds for the biggest victory of his career.

"All the people than don't realize it, our cars are fast," Ferguson said of his Team Zero chassis. "For a long time I've dreamed about being at this level. I feel like I can drive good enough to get it done now."

Thornton felt good about his runner-up finish, which resulted in a $20,000 payday for the Adel, Iowa, driver.

"We came really close and it kind of sucks to run second, but congrats to Fergy," Thornton said. "He is really good, especially late. We had a really good car yesterday and it put us in a good position for today."

Tony Jackson Jr. of Lebanon won the Midwest Sheet Metal Show-Me Challenge last-chance qualifier, but with transmission issues he elected to take the $2,500 prize rather than trade the check for a spot at the tail end of the Show-Me 100 feature lineup.

McCowan rolls to USRA Modifieds feature win: Dillon McCowan of Urbana dominated the Cedar Creek Beef Jerky USRA Modified portion of the program, leading all but one lap of the 30-lap main event to take home $1,500.

It was the fourth feature victory in six attempts this season at Lucas Oil Speedway for McCowan, the reigning track champion in the division.

McCowan started outside of row one and led until Matt Johnson slipped past him coming out of turn four on lap 19. But McCowan quickly regained command on the next circuit and drove away from there. He finished .767 seconds in front of runner-up Tyler Davis.

McCowan said it felt good to win a race that was part of the Show-Me 100 program, especially after coming up short on Friday night when his engine went sour.

"It feels really good to win one of these finally. I've been coming over here and watching these for I don't know how long," McCowan said. "The car was good and the track was good tonight. I'm really happy.

"Me and the guys stayed up until 3 a.m. putting this motor in this car. It was a lot of work, but it paid off."

Week off, then Weekly Racing Series and Drag Boats: Lucas Oil Speedway action will take a break next weekend before returning in a big way for a dirt-track/drag-boat doubleheader the following week.

The first of four Kentucky Drag Boat Association-sanctioned events on Lake Lucas, the KDBA Spring Opener, will see three days of action on the water June 10-12. The middle day also will include the Big Adventure RV Weekly Racing Series Round 4 on the dirt track on June 11 where it will be $5 Night at the Races Presented by KOLR. The Cedar Creek Beef Jerky USRA Modifieds will be running a special 25-lap, $1,000 to win main event as fans pay only $5 for grandstand admission. Kids 5-and-under are FREE as always.

To purchase tickets for the Show-Me 100 or any event on Lucas Oil Speedway's schedule, or to inquire about camping information, contact Admissions Director Nichole McMillan at (417) 295-6043 or via email at nichole@lucasoilspeedway.com.