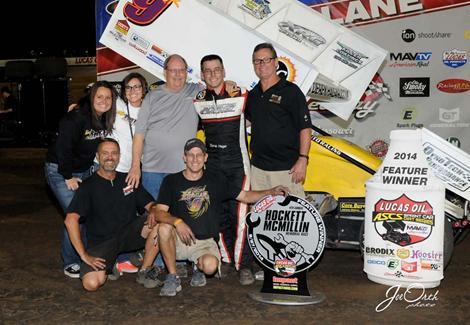 Hagar captured his second Lucas Oil ASCS National Tour triumph of the season by winning Saturday’s feature and he garnered a pair of top fives with the WAR series.

“Me and Jesse were teammates in a silver crown deal the year he passed away,” he said. “He was a good guy and I was honored to be teammates with him. Two years ago I won the Hard Charger Award during this event so to have those two trophies feels pretty cool.”

The weekend kicked off last Friday with Hagar advancing from fourth to third place during his Lucas Oil ASCS National Tour heat race. That relegated him to a B Main, which he won to transfer into the main event. He then rallied from 17th to a 12th-place result.

“We got up to 10th and on the last lap I got up above the cushion and lost a couple of spots,” he said. “It was a struggle the whole night. It took me a while to adjust to going back and forth between the 360ci winged car and the 410ci nonwing car. After I finally got settled down we were good in the feature and we were a lot better on Saturday.”

In WAR action, Hagar set quick time during qualifying and he charged from 10th to win his heat race. That gave him the most points entering the feature redraw. He pulled the No. 3 to line up on the inside of the second row for the main event.

“We just missed on setup,” he said. “Between the sprint car and the nonwing there wasn’t much time. It was pretty much boom-boom the whole night. We got up to second, but as the track went away the car started going away.”

He finished fifth in the nonwing feature.

The weekend concluded on Saturday with Hagar winning his ASCS heat race after starting third. That locked him into the feature redraw, where he received the No. 5 in the random draw to start the 30-lap feature on the inside of the third row.

“I had a real good car early,” he said. “We shot up to third in the beginning and rode there for a little while. I could tell getting in to the corners it was getting slick on the bottom so I moved to the top. Midway through the race I pulled up beside Wayne Johnson on the frontstretch and then exiting turn two he came up the track and I got into him. I don’t know if he was trying to take my line or what. It was an unfortunate deal. I tried to do everything I could to keep it from happening.”

Hagar, who advanced into second place, took the lead with seven laps remaining.

“I knew that lapped traffic would play a pretty big role,” he said. “(Jeff Swindell) wouldn’t come off the bottom and I wasn’t going to come off the top. He slid a car and lost some momentum and I capitalized on it in turns one and two. We led it for a couple of laps and then we had a caution. I made sure on the restart I got a good enough restart that I wasn’t going to deal with any slide jobs in turns one and two.”

Hagar’s victory was his 15th of the season.

His night ended with the WAR nonwing main event. Hagar started ninth after qualifying eighth quickest and rallying from eighth to win his heat race earlier in the evening.

“We got up to fourth or fifth pretty quick in the feature,” he said. “Then I ran off the race track in turns one and two and hit the wall and broke the Jacob’s Ladder. I backed up to ninth or 10th. We had a couple of cautions and several red flags. We had one open red and made a lot of changes to the car. I could roll the middle really well after that and that’s where we made up a lot of ground.”

Hagar maneuvered to a runner-up result, which was his 22nd top five of the season.

He is slated to take this weekend off before driving for Destiny Motorsports on Oct. 10 at Waynesfield Raceway Park in Waynesfield, Ohio, for the 2nd annual Harvest of Sprints and on Oct. 11 at Eldora Speedway near Rossburg, Ohio, with the UNOH All Star Circuit of Champions.

Oct. 10 at Waynesfield Raceway Park in Waynesfield, Ohio, for the 2nd annual Harvest of Sprints and Oct. 11 at Eldora Speedway near Rossburg, Ohio, with the UNOH All Star Circuit of Champions

Here is a video of Hagar winning the Jesse Hockett/Daniel McMillin Memorial with the Lucas Oil ASCS National Tour on Sept. 27 at Lucas Oil Speedway: http://youtu.be/C3_ieWghINg

Ride along with Hagar during his victory at I-30 Speedway on April 5 thanks to this video by Jones Sports Media: http://youtu.be/JDYTr1M4KjM

Hagar has t-shirts, hats and koozies available for sale at his race trailer at every race he competes at. To see his schedule, visit http://www.DerekHagar.com/schedule.

“They’ve been in the family since J&J Auto Racing started building cars,” Hagar said. “My stepdad’s dad owned race cars back in the Riverside days. They are good, safe, dependable race cars and great people to deal with.”