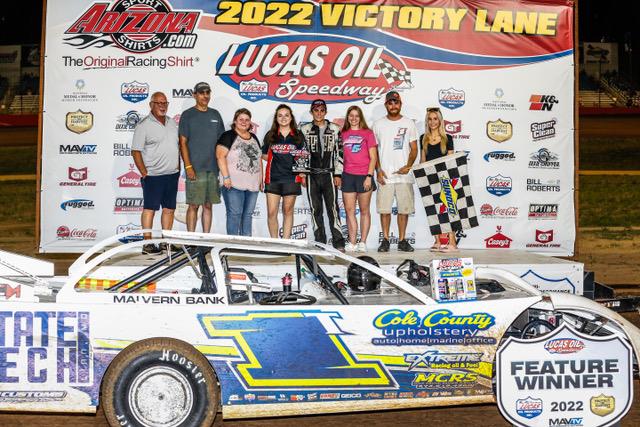 Cox captured a long-sought first Late Model feature victory at Lucas Oil Speedway, along with two feature triumphs at Callaway Raceway. Now with a new season approaching, the 23-year-old from Jefferson City is eager to try and carry over the momentum.

"It was pretty good overall," Cox said of last season. "I was a little frustrated about midway through the year, but at the end we won three of the last four races. We started getting the car figured out."

Cox wound up a distant second to veteran Larry Ferris in the Lucas Oil Speedway Hermitage Lumber Late Model points chase as Ferris had a dominant season. But Cox, who's still learning the Late Model game, is planning an ambitious schedule in 2023 with 39 events planned, between Lucas and Callaway.

"With a couple of other places, we hope to run 43 total," said Cox, who said his MB Customs race car is just about ready to roll after a motor freshening and usual offseason maintenance.

Cox, the son of long-time Late Model regional racer Chris Cox, said the car started to come around when he stopped trying to throw the kitchen sink at it between his heat race and the feature. Things clicking the final Saturday night of August at Wheatland when he led all 20 laps to prevail, by 1.5 seconds over Matt Becker.

"Winning that first (feature at Lucas) meant a lot because we finally got everything going the right direction," Cox said. "We weren't really far off. Larry Ferris was really good. We just needed to not change so much from the heat race to the feature.

"That was the biggest thing. I was over-adjusting a little bit for the feature. It was more my fault than anything really. We changed a few things on the shocks and springs and that was really about it."

As for 2023 goals, Cox is ready to raise his standard. He recently told his dad he wants to win at least 10 features this season.

"I think that’s a pretty good goal," he said. "As far as the points go, I’d like to win Wheatland’s track championship as well as Callaway’s. But I’m not gonna get too worried about points. Just gonna try to win all I can and go from there."

Cox knows that Ferris will be tough to beat, but he welcomes the challenge.

"Larry and Brian Larimore worked really hard last year," Cox said. "Larry’s a really good driver and he’s been racing for a long time. It’s hard to compete with him, but I’m glad he races with us. That makes me better and everybody else better, too."

When Lucas Oil Speedway released the schedule, which finds the season opening several weeks earlier than it did a year ago, Cox smiled. That's when his idea of a busy workload, of 39 or more races, kicked in.

"I’m real excited because Wheatland is starting a little bit earlier," he said. "I like starting earlier. Hopefully if we have troubles, we get those out of the way early. Hopefully we don’t have any. The main thing is starting the season out a little stronger than last year.”

Three-day pass renewals for the event are $115 and can be purchased through the Lucas Oil Speedway office by calling Admissions Director Nichole McMillan at (417) 282-5984 or email her at nichole@lucasoilspeedway.com for more information. The renewals are available through Jan. 31. After that, the three-day reserved seats will be available for anyone to purchase. Each pass is for one reserved stadium-style seat, complete with high backs and armrests located in the top six rows of the main grandstand.

Fans also can now purchase online tickets for general admission for the Show-Me 100 and the Superstar Racing Experience (SRX) race at Lucas Oil Speedway, scheduled for Aug. 17th. The SRX Thursday Night Thunder event will be the finale in the six-race series, which features some of racing's biggest names.

Show-Me 100 general admission three-day tickets through Stubwire are $100 for adults, $91 seniors/military and $30 for youth. Those can be found at https://www.stubwire.com/event/31stannuallucasoilshowme100/lucasoilspeedway/wheatland/28138/

Tickets for the SRX event will be $35 in advance and $40 at the gate (ages 16 and over). Kids (ages 6-15) will be $20 with ages 5-and-under free. Advance tickets can now be purchased via Stubwire - https://www.stubwire.com/event/srxespnthursdaynightthunder/lucasoilspeedway/wheatland/28075/

Season Passes available: Season ticket holders also can insure they have a seat for all three nights of the Show-Me 100 and the SRX event by purchasing a season pass. Those prices are:

Contact Nichole McMillan at (417) 282-5984 or email her at nichole@lucasoilspeedway.com for more information.