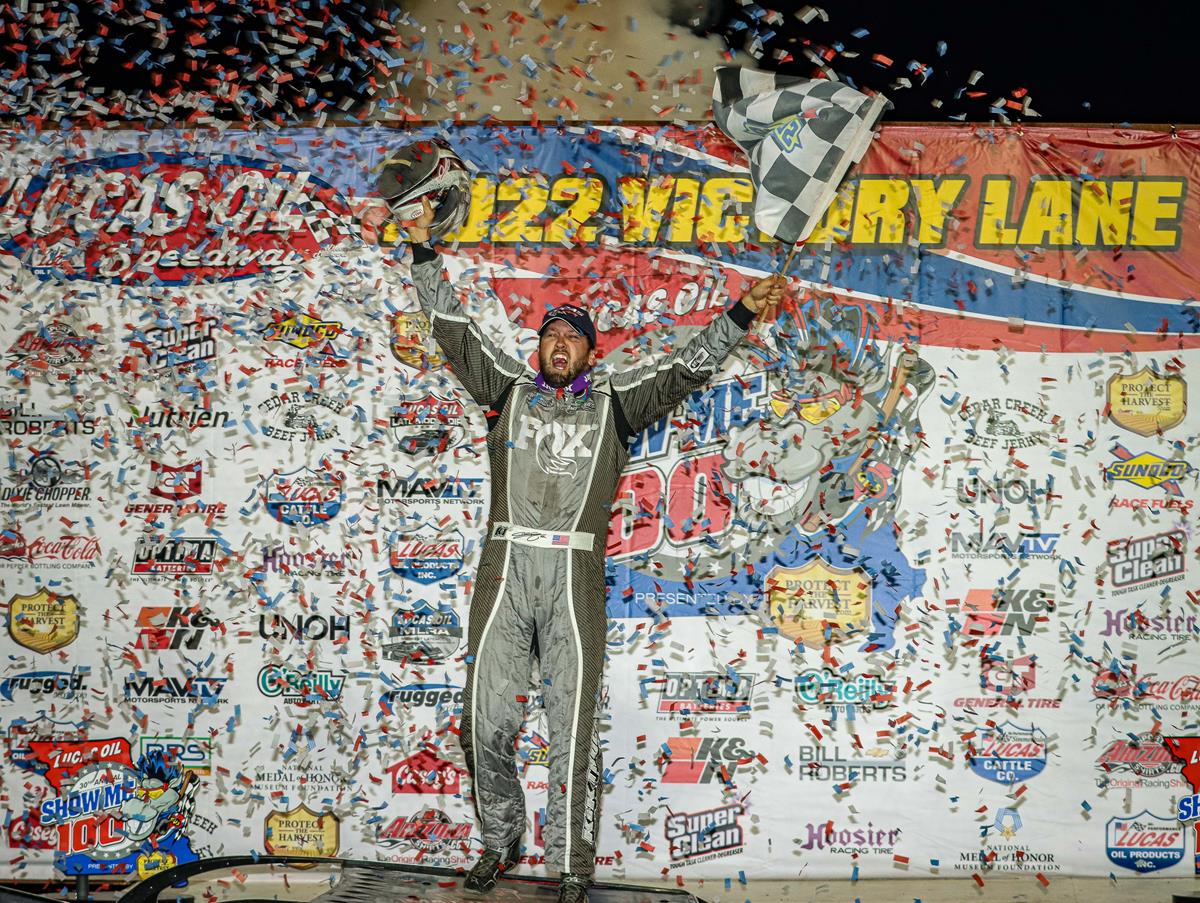 Diamond Dozen: Looking back at 12 top moments of the 2022 Lucas Oil Speedway season

WHEATLAND, MO. (Nov. 3, 2022) - With another great season in the books at Lucas Oil Speedway, it’s time for our annual look back at some of the top races, moments and storylines from the 2022 season. Here’s our “Diamond Dozen” as compiled by track Public Relations Director Lyndal Scranton and the Lucas Oil Speedway staff:

The Mount Holly, North Carolina driver grabbed the lead from Jonathan Davenport with 12 laps remaining in the Memorial Day Weekend event and earned a race-record $50,000 by finishing 3.04 seconds in front of runner-up Ricky Thornton Jr.

"God is so great. He put me in this situation. That was awesome," Ferguson added. "This is amazing and I'm so thankful to be here."

It was enough to make Scott plenty anxious, with Owens closing in and with lapped traffic to navigate on the final circuit around Lucas Oil Speedway on July 16.
But Scott, of Las Cruces, New Mexico, held on to beat Owens by .678 seconds in a caution-free 50 laps that clicked past in just 14 minutes, 32 seconds.

"It's a heck of a night," Scott said in victory lane. "I've been trying so hard to win these Lucas Oil races. It just feels good to get one."

Highlighting the action were the top modified divisions as Tyler Wolff of Fayetteville, Arkansas, dominated the week in the USRA Modifieds and Ryan Gillmore of Springfield was the strongest from start-to-finish in the B-Mods.

The final night saw Wolff lead all 40 laps to earn a decisive feature victory. Wolff swept his qualifying races earlier in the week, started on the pole and drove to a three-second victory over runner-up Kevin Stoa. Wolff took home $4,000 for his eighth feature victory of 2022.

Gillmore also topped off a perfect week by leading the USRA B-Mod championship feature all 35 laps, posting his second career USRA Nationals triumph. Gillmore won all four of his qualifying heats plus the Summit Shootout earlier in the week. Gillmore held off Brandon Hare for the victory, his 13th of the season. He took home $2,000.

4 - Make it a record seven for Jackson: In a race that summed up a season-long battle between the top two Ozark Golf Cars USRA B-Mod drivers, Kris Jackson of Lebanon held off Ryan Gillmore by half a second for his fifth feature win of the season on July 23.

"I could hear him that whole race," Jackson said of Gillmore. "I don't know if he was trying the outside lane or not, but I knew if I made one little bobble he'd be there."

5 - McCowan repeats as USRA Modified champ: Some wins are more exciting than others and Dillon McCowan enjoyed one of his most thrilling feature victories on June 11 in the Cedar Creek Beef Jerky USRA Modified division. McCowan drove from a 14th-starting position all the way to the front to capture the $1,000 triumph.

The 18-year-old took lead on lap 23 out of turn 4. McCowan, of Urbana, beat Nick Bidinger by a car length for his fifth feature victory of the season. Afterward, he spoke of how special it was to win in front of his grandpa, A.D. McCowan.

"I want to say a special shout-out to my grandpa. He's not been here in a while and this is one of the more special ones because he got to be here and we came from the back," McCowan said.

McCowan's feature win was one of seven in the Big Adventure RV Weekly Racing Series as he successfully repeated his track championship.

6 - Johnson and Randall capture Hockett-Memorial wins: An old pro and a youngster celebrated feature victories in mid-September at the 12th annual Jesse Hockett-Daniel McMillin Memorial. The veteran was Wayne Johnson, a two-time Lucas Oil ASCS Sprint champion who picked up his second Hockett-McMillin triumph in the winged portion of the open-wheel major.

The victories came in front of a big crowd on the finale of the three-night event. The Hockett-McMillin Memorial recognizes the legacy of Jesse Hockett, from Warsaw, Missouri, who was a star in both the winged and non-wing sprint divisions when he lost his life in a shop accident in 2010. His cousin and crew chief, Daniel McMillin, was killed in an automobile accident in 2006.

Eight-starting Johnson, of Oklahoma City, took the lead on lap 25 and held it the rest of the way in the 40-lap ASCS feature to capture his second Hockett-McMillin Memorial. Johnson outdistanced runner-up Blake Hahn to earn the $10,000 prize.

7 - Ramirez continues Show-Me Shootout domination: When the United States Modified Touring Series rolls into Wheatland, it’s always a show and lately Dereck Ramirez has been the man to beat. Ramirez did it again on Aug. 6 at the USMTS Slick Mist Show-Me Shootout Presented by Foley Equipment, capturing his third straight USMTS win at the speedway.

"I did all I could. I manhandled that thing. This is not my kind of race track," Ramirez said after his ride on the high side throughout was enough to win against at Lucas Oil Speedway. His three USMTS wins are the most by any series driver at the track.

Wells - who won a Midwest Late Model Racing Association feature as the speedway opened 16 years earlier - became the first Late Model winner other than midseason co-champions Larry Ferris and Cole Henson in 2022. He beat Ferris by about six car lengths.

“I'd like to thank everybody on my car, my family over here and everybody who helps me every week," Bryan White said. "It's just a dream, really, to even win a race over here let alone a championship.”

Ferris picked up his fourth feature victory of the season as he wound up 4.7 seconds in front of runner-up Dalton Imhoff and earned $1,000 for the triumph. He started on the pole and roared away from the start with JC Morton giving chase in the early going. Morton pulled alongside Ferris going into turn one on lap six, with third-place Dillon McCowan about 10 car lengths behind.

Over the next four laps, Ferris began to settle in and was able to extend his lead to 1.7 seconds and kept pulling away from there.

11 - KDBA returns to Lake Lucas with Allen setting a record: The Kentucky Drag Boat Association returned to Lake Lucas for four events in 2022, including a 120-boat field for the Labor Day Weekend Diamond Drag Boat Nationals.

One of the big stories of the KDBA season was Rick Allen in the Top Alcohol Hydro division. Allen set a track record in the TAH class during the June KDBA Spring Opener on Lake Lucas with an speed of 208.52 miles per hour and a 4.31 ET.

Allen went on to capture the division championship during the Diamond Drag Boat Nationals, taking the win in the finals over Mike DeClark.

12 - Tony Jackson Jr. back in form: Back in top form near home and in a new car, Tony Jackson Jr. of Lebanon took the lead on lap 12 and rolled from there to capture the 8th annual Lucas Oil MLRA Ron Jenkins Memorial on Labor Day Weekend.

Jackson earned a total $9,250, including $1,500 in bonus money from Mary Jenkins for the win plus $750 for setting fast qualifying time. The main event saw Jackson take command just past the quarter mark of the 40-lapper. The 2021 MLRA champ went on to capture his third series feature win in the last month in a new Capital Race Car.

For information regarding gift certificates which can be used in various areas of the speedway in 2023, contact Lucas Oil Speedway Admissions Director Nichole McMillan at (417) 282-5984 or by email at
nichole@LucasOilSpeedway.com.