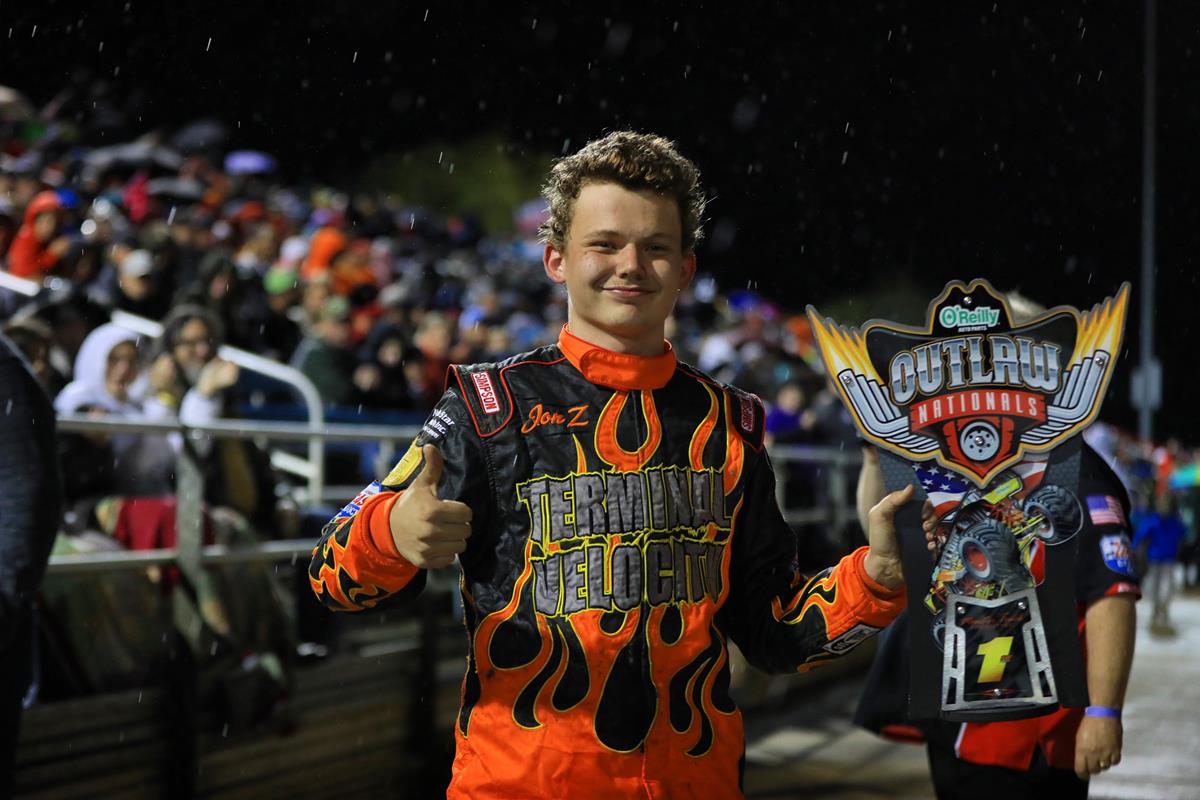 WHEATLAND, MO. (Oct. 19, 2022) - Jon Zimmer Jr. grew up around the sport of Monster Trucks as his dad, Jon Zimmer, drove one of the iconic machines in the sport, the legendary Gravedigger.

So it was only natural for “Lil’ Jon” to follow in his dad’s rather large tire tracks and make his own way into the driver’s seat.

“I knew I wanted to get into the sport one way or the other,” Jon Zimmer Jr. said. “A couple of years ago, I had that shot and I haven’t looked back since.”

“Lil’ Jon” will pilot Dirt Crew at this Saturday’s O’Reilly Auto Parts Outlaw Monster Truck - Eve of Destruction. Dirt Crew is one of eight Monster Trucks scheduled to get after it as the main attraction of a big, season-ending program at Lucas Oil Speedway.

Zimmer Jr., of Grandy, North Carolina, will be making his second appearance as a driver at Lucas Oil Speedway. It was one year ago when, on short notice, he drove Jamey Garner’s Terminal Velocity to a freestyle win at Eve of Destruction.

“I was already out there, crewing for my buddy Zack Garner,” the 22-year-old Zimmer said. “His truck ended up blowing a motor the day before the show, doing a ride experience. We made some phone calls and got my truck (Terminal Velocity) there. It was last-minute notice and ended up winning freestyle and doing pretty good in the entire event. That was an awesome night.”

This year he will be filling in as driver of Jerry Beck’s Dirt Crew as Beck is unable to attend.

“Jerry had some things come up and gave me a call,” Zimmer said. “I love watching his truck and said 'sure, I’d love to try and defend the freestyle title in a totally different truck.' ”

Zimmer said Dirt Crew is a bit different than his regular ride, but he thinks it’ll work out fine.

“The drivability between the two trucks is a night-and-day difference,” Zimmer said. “My truck last year had a stiffer set up. Dirt Crew is very top heavy, kind of old-schoolish the way it’s set up. I’ve seen videos of it and drove it a couple of times and it’s fun to drive.”

While he was around the sport as a youngster, Zimmer had to pay his dues behind the scene for a chance to become a driver. He’s been a regular on the Monster Jam indoor arena circuit the last couple of years, earning Rookie of the Year honors with 13 wins.

“Before I ever worked on Monster Truck, I got my start through Adam Anderson who drives ride trucks and drove those during the summer,” Zimmer said. “A couple of summers in I met Zack’s dad, Jamey Garner, at a summer show and started coming out and helping at shows with him. I ended up doing a first quarter in 2019 with him for Monster Jam as a crew mechanic and have been working with him ever since.

“In 2020 Jamey said, ‘You’ve been working your butt off. I think we’ll give you my old truck and make it however you want and have it. That’s how it’s been ever since.”

It’s more or less been learning on the job.

“A lot of the drivers can practice if they have that option, but for me the first time I drove a truck was at a show in August of 2020,” Zimmer said. “Ever since, everything I’ve learned has been trial and error. Sometimes it works out in my favor, something super cool. Other times, I’ll end up falling on my face and turning the truck over.

“Once I put helmet on, it’s time to go and have some fun for all those fans.”

While it’s a big-time show for the fans, Zimmer said the competitive juices flow among the drivers with everyone’s eyes on the first prize. On Saturday, Zimmer and Dirt Crew will be going up against his boss, Jamey Garner in Over Bored, and his friend and teammate Zack Garner in Wildside.

“We’re all friends behind the scenes and all help each other with any problems at the shows,” he said. “But as soon as we line up with our helmets on, we’re not friends any more. It’s me against you and may the best man win.”

Gates open at 4:30 Saturday with a Pit Party running from 4:30-6:30 p.m. where fans can meet drivers, get autographs and take up-close photos of the drivers and their machines.

Fans are encouraged to dress in their Halloween costumes with the kids trick or treating during the Pit Party. The big show is set to fire up the engines at 7 p.m.

Here's a look at the show schedule, which features the Monster Trucks but has much more:

Monster Trucks: This year's lineup of the mighty trucks is set to include eight trucks - Bad Habit, Jurassic Attack, Over Bored, Kamikaze, Wild Side, Dirt Crew, Tailgator and the new Dozer. The Monster Truck Back Flip ramp is set to return.

Mega Trucks: The Meg Trucks with their 48-inch Monster Truck tires are 1,500-pound beasts, sure to put on an unbelievable show of power.

Pro and Stock Tuff Truck Racing: Local weekend warriors and professional from around the country will battle it out on the treacherous course. Think you have a Tuff Truck? Call (417) 887-9400 to sign up.

Mighty Monster Bus Ride Truck: Fans can take a ride of a lifetime in a real-life mosnter truck, strapping in just like the pros and take a ride around the track. Climb aboard during the Pit Part, during intermission or after the show.

Tickets are available in advance at participating O'Reilly Auto Parts stores or online at at Lucasoilspeedway.com.