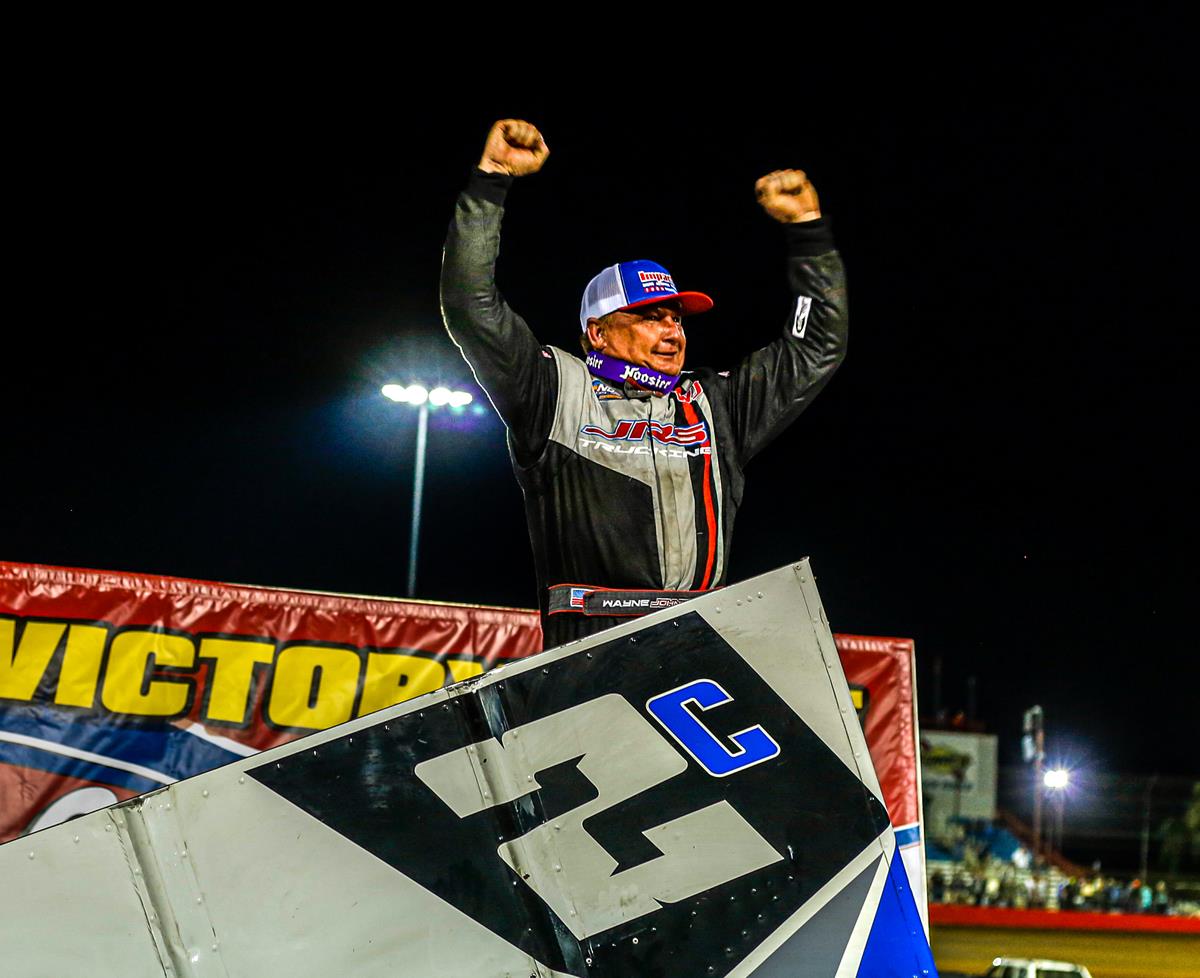 The veteran was Wayne Johnson, a two-time Lucas Oil ASCS Sprint champion who picked up his second Hockett-McMillin triumph in the winged portion of the open-wheel major.

The victories, in front of a big crowd on the finale of the three-night event, were memorable for both drivers. The Hockett-McMillin Memorial recognizes the legacy of Jesse Hockett, from Warsaw, Missouri, who was a star in both the winged and non-wing sprint divisions when he lost his life in a shop accident in 2010. His cousin and crew chief, Daniel McMillin, was killed in an automobile accident in 2006.

Eight-starting Johnson, of Oklahoma City, took the lead on lap 25 and held it the rest of the way in the 40-lap ASCS feature to capture his second Hockett-McMillin Memorial. Johnson outdistanced runner-up Blake Hahn to earn the $10,000 prize.

"He's like a second dad to me," an emotional Johnson said in victory lane, standing next to Jack Hockett, Jesse's father. "I loved the boy. Jesse was like a brother to me. We did a lot together."

Dylan Westbrook started on the pole and cleared to the early lead with the third-starting Sam Hafertepe settling in behind him.

Three-time Hockett-McMillin winner Hafertepe grabbed the lead coming off turn two on lap five and quickly pulled away to a 1.5-second cushion over Westbrook over the next two laps. Aryton Gennetten moved into the runner-up position by lap nine with Westbrook falling back into third.

The leaders hit lapped traffic by that point and Gennetten, using the low groove, was able to cut the lead to just under one second before Hafertepe again opened it up to 1.66 seconds before the race’s first caution appeared on lap 15.

Johnson, 51, made his way past Gennetten for second on the restart with Blake Hahn moving into third as Gennetten fell back. That’s the way the top four were running when another caution slow things on lap 19, when Hafertepe’s lead was a half-second over Johnson.

Hafertepe, Johnson and Hahn broke away from the field after the restart and Johnson, hugging the low groove, took his first lead coming out of turn four to complete lap 25.

Johnson said it felt like fate was on his side at that point.

"Every one of them damn cautions came out at the right time. I lost the brakes," Johnson said. "I'm sure my brake rotors were glowing. I had no pedal left every time the caution came out and it saved my butt. I'm pretty sure ol' Jesse wanted me to win this race and he got them cautions for me."

Johnson wasted no time opening a two-second lead as Hahn moved into second and Hafertepe fell back to third. Johnson was 1.8 seconds in front when a red flag on lap 30, for Westbrook’s flip in turn two, brought the action to a halt. Westbrook, who was running eighth, climbed from the car without assistance.

That left 10 laps to go when action resumed Johnson roared away from Hahn to add a Hockett-McMillin trophy to the one he earned in 2016. Johnson finished 1.3 seconds in front of 2019 winner Hahn with Bogucki coming home in third.

Hahn said he had mixed feelings about coming up short. While disappointed he did not win, he was able to ride on seven cylinders to the finish.

"About halfway through the race we had some motor issues," Hahn said. "We had 20 laps to go with it bogging down, but thankfully she held. It's just pretty frustrating. I felt like I owed it to my team to pick up a victory. We had a really good car tonight, but to be able to finish on the podium with seven cylinders is something to be proud of."

Hafertepe settled for fourth with Matt Covington rallying from 11th to fifth.

Randall beat Mario Clouser by .602 seconds to back up his Friday-night preliminary feature victory. Clouser had won on Thursday and the two started on the front row of Saturday's big finale.

"Man, this is an awesome weekend," said Randall, who also ran in the ASCS Sprint feature. "We came here to run non-wing just for fun with the ASCS and I think we might fun it a little bit more now. The car's obviously working well. My dad has this EMI chassis tuned up well.

"This kind of track just suits my style, just throw it up in there and hope it sticks. It was a great race with Mario."

Clouser, of Chatham, Illinois, used a slider in turn three to take the lead from Randall as the two front-row starters dueled on the opening lap. He was able to clear out to a 1.6-second lead by lap seven as Wyatt Burks closed in on the rear of Randall.

The race’s first caution flew on lap seven and bunched the field for a restart. Clouser maintained command as green-flag action resumed, but another caution slowed the field on lap nine.

Just as Clouser had rebuilt a 1.5-second lead by lap 14, his margin again was negated by the event’s third yellow flag just one lap shy of the halfway mark.

Clouser didn’t get away as easily on the next restart, with Randall, defending race champ Wesley Smith and Burks closely following before a lap-19 caution waved.

Randall used a slide job out of turn four to take the lead for the first time, on lap 22. Clouser stalked him over the next several laps, briefly going in front in turn two on lap 27, but was unable to make it stick.

"He threw a hail Mary slide job at the end and I didn't see it coming until the last second," Randall said. "It was a good race."

Randall held on the rest of the way to pick up the victory, finishing about three car lengths in front of Clouser who admitted his disappointment in coming up just short of his first Hockett-McMillin victory.

"I don't know if I just ran it too hard there early and burnt the tire off it, but we definitely didn't have anything left at the end," Clouser said. "I don't even know what to say. I didn't want to run second tonight, at all.

"It's especially frustrating. We've been fast here, but haven't been able to get it done on Saturday yet."