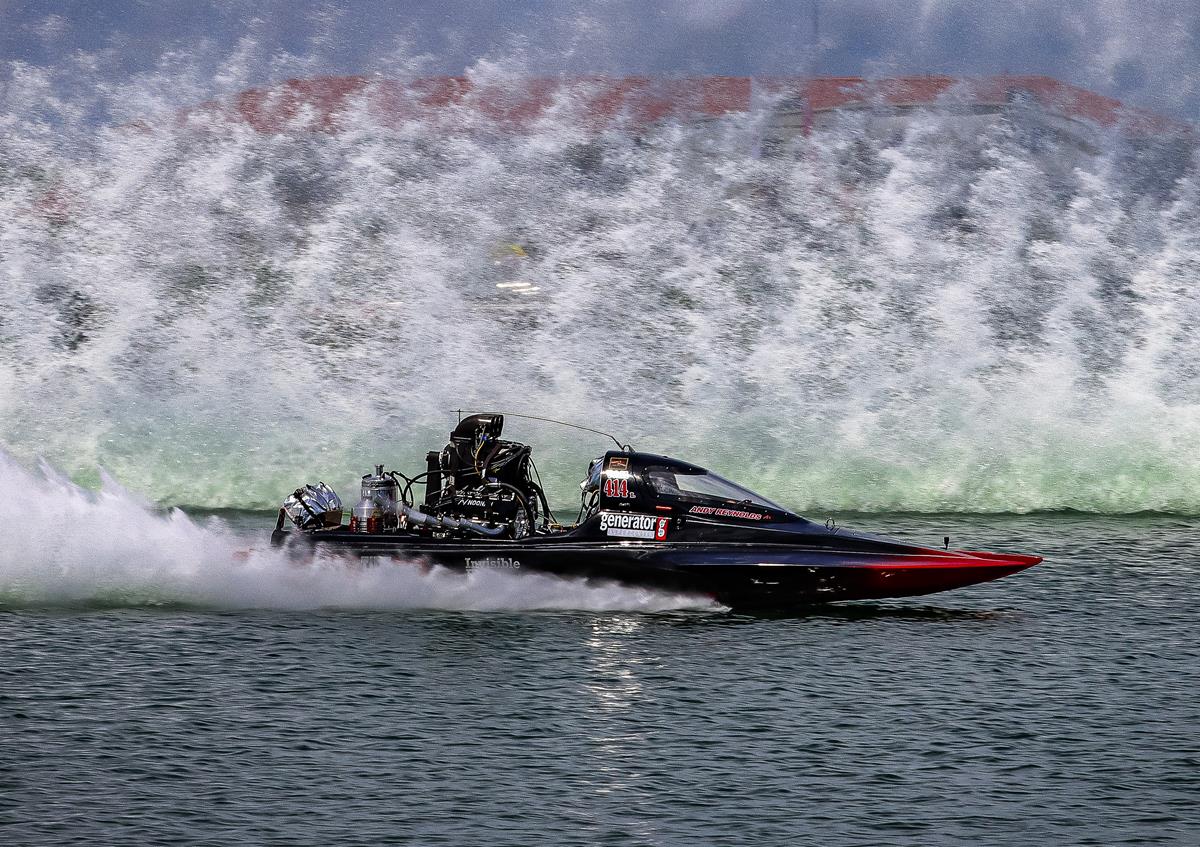 WHEATLAND, MO. (July 28, 2022) - As one of the veterans of professional drag boat racing, Andy Reynolds has captured multiple championships on the water in his Top Alcohol Hydro boat “Running With Scissors.”

But so far, the 2022 season has not been the veteran South Carolina driver’s best. Mechanical issues with a new motor have plagued Reynolds in the first two Kentucky Drag Boat Association-sanctioned events held on Lake Lucas.

“It’s been a rough year this year,” Reynolds said. “We had high hopes after we built a new motor over the winter. We went to the first race there in June and had some electrical issues. The second race, we got off to a slow start again in qualifying and got beat.”

Reynolds has since returned to his old, dependable motor package and looks for better results this Saturday and Sunday when the KDBA returns to Lucas Oil Speedway for the KDBA Show-Me Shootout.

“We do it for the love of the sport,” Reynolds said of drag boat racing, calling Lucas Oil Speedway the most fan-friendly venue he’s encountered. “We love interacting with the fans there. We hope the fans will stop by the pits and say hi. We’ll put them in the cockpit, especially the kids.

“You’re never going to make money at it, but hopefully we can win a little money here and there and pay for some parts.”

Reynolds, 51, started boat racing as a teen after his older brother retired from the sport and started building motors. Andy started competing as a driver for the Stokes Family (Gary, Eric and Sylvia) in an open cockpit boat named “Cole Fever,” winning Rookie of the year and points championships in 1992 and 1993 with a top speed of 133 miles per hour.

Then Reynolds started competing in a boat co-owned with his brother named "Parental Discretion Advised" in the Pro Eliminator category. After a few years, there was the itch to go faster and in 1997 he made the move to the Pro Modified category with speeds nearing 180 mph.

Reynolds moved up to the professional category of Top Alcohol Hydro thanks to some generous friends and sponsors Tom and Kathie Cowman in 2000. That year the team set the NDBA ET and mile-per-hour records at 5.61 at 215.66 mph in a quarter-mile course. He also won the prestigious World Finals of Drag Boat Racing at Firebird Lake in Chandler, Arizona.

Over the last decade, Reynolds said the biggest change in the TAH division has been the cut back in distance from a quarter-mile to 1,000 feet.

While Reynolds briefly dabbled in dirt-track car racing earlier in his career, he said the sensation of going fast on water is a sensation that’s hard to describe.

“I tell people, if you’ve ever been on a roller coaster and it drops off the steepest point, when it rolls your stomach back, that’s kind of how it feels when it takes off,” Reynolds said. “I remember going from Pro Mod to TAH. Your mind don’t catch up to it until about three-quarter track. You’ve got a lot going on in that four seconds.”

The big challenge this weekend is finding a way to beat Texan Rick Allen, who’s won the first two KDBA events this season on Lake Lucas with record runs at 1,000 feet with an ET of 4.25 seconds and 210.47 mph.

“And I would like to thank this weekend’s sponsor, Ron and Chris with H&K Automotive out of North Carolina for their diesel fuel sponsorship to help cover some of the travel,” Reynolds said.

The Show-Me Vintage Racers will join the normal four divisions on the dirt track as a special guest class. The SMVR cars will be on display on the Dirt Track midway for fans to view up close.

Food and drink specials on Saturday night will include $1 nachos and cheese, $2 hot dogs and $2 soft drinks or waters.

Dirt-track drivers can pick up free tickets: Upon check-in at the pit office, drivers in attendance this Saturday can receive 50 free general admission tickets for the Aug. 27 Rempfer Memorial Season Championship Night. Drivers with the most tickets used on Aug. 27 will win one free season pit pass for 2023.

Kids' Power Wheel Races return: Kids' Power Wheel races are scheduled during intermission Saturday night on the front straightaway. Youngsters ages 3-9 can enter their own battery-powered Power Wheel cars by signing up for the Frogs Jr. Fan Club on the south end of the Midway prior to the races.