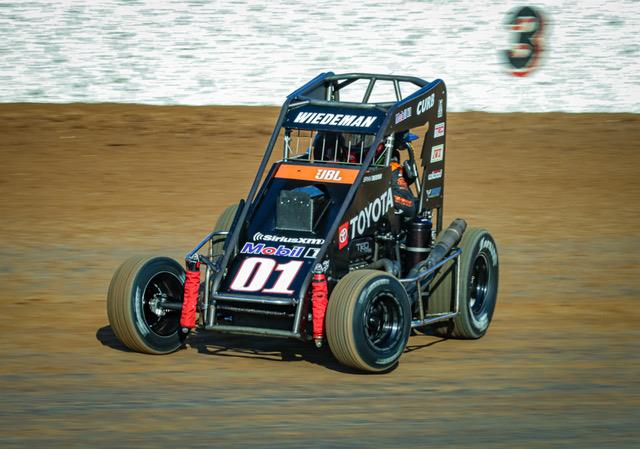 WHEATLAND, MO. (May 11, 2022) - Bryant Wiedeman is about to wrap up his sophomore year at Colby High School in western Kansas and that means his focus can shift full-on to his racing endeavors on dirt tracks across the country.

Being a race-car driver definitely is an attention-getter among friends and fellow students.

“I think they’re really proud and enjoy keeping up with my racing,” Wiedeman said. “It’s cool they care that much and want to watch and see how I grow in the sport."

The 16-year-old Wiedeman definitely is an up-and-comer in the world of open-wheel racing, as the reigning Lucas Oil POWRi National Midget Series champion. He will be at Lucas Oil Speedway on Saturday for the 11th annual Impact Signs Awnings Wraps Open Wheel Showdown.

“I’m really excited to go back there,” Wiedeman said of Lucas Oil Speedway, where he finished third in this race a year ago, his first action on the Wheatland oval. “I recall it being a pretty technical track, opposite on both ends. One was top and the other bottom and it was very challenging, but definitely a fun track to race at.

“Last year was a learning curve for most places I went. This being my second year, I have a better chance at a lot of these tracks because I’ve been there and know how to get around them now. I think it’ll definitely help me out this weekend.”

Unlike many young drivers, Wiedeman did not grow up in a racing family. He’s a first-generation racer who started racing go-karts at the ago of six after he and dad Brent were invited to a go-kart race by friends.

“I think we both fell in love with it and it went from there,” Bryant said. “We bought a go-kart and really enjoyed that, moved up to the micros and (eventually) found myself racing a Keith Kunz Midget.”

For those not familiar with Midget cars, Keith Kunz Motorsports is one of the iconic teams in the sport. Kunz has been instrumental in the development of many of the sport's stars, including Kyle Larson and Christopher Bell.

Bryant Wiedeman said the knowledge that Kunz and other team members impart is priceless to a young driver.

“It’s a good thing to have on my side,” he said. “That’s a big deal and a leg up I have on the competition.”

Wiedeman won more than 100 races in seven years in go-karts and moved into the micro-sprints where he caught the attention of Kunz. In his first full season for KKM in 2021, Wiedeman said he exceeded expectations as a POWRi National Midget rookie, becoming the youngest national champion. He posted three wins, 18 top-five finishes and 28 top-10s in 30 events.

“I was just going into the year looking for Rookie of the Year championships,” Wiedeman said. “But winning POWRi was a huge deal to me and my team. We’re definitely looking to progress off that this year and looking forward to seeing how we can perform in USAC points as well.”