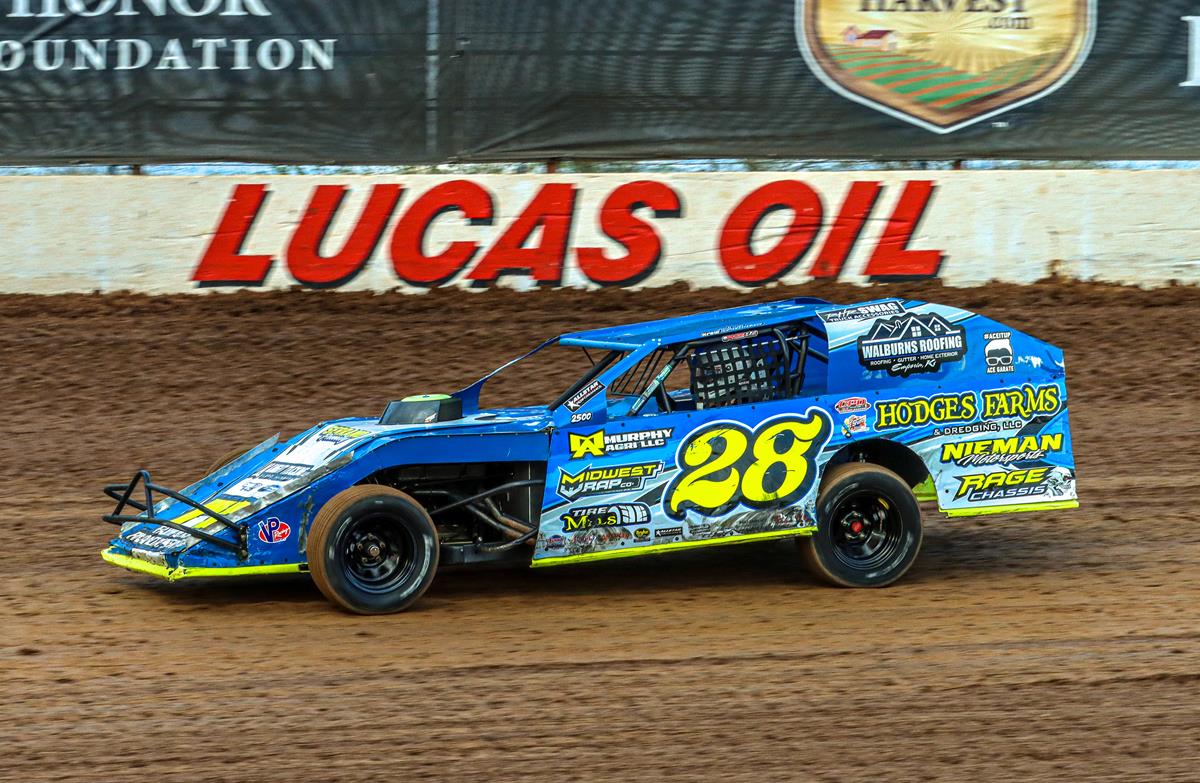 WHEATLAND, MO. (May 4, 2022) - Krew Walburn’s first appearance at Lucas Oil Speedway was an impressive one. The 19-year-old from Emporia, Kansas, ran third in the Ozark Golf Cars USRA B-Mod feature behind a pair of former USRA national champions, Andy Bryant and Kris Jackson.

Walburn plans a return visit this Saturday as the B-Mods are the featured class, running a 25-lap main event for $750 to win courtesy of Clearlight Inn.

Walburn, a second-generation racer who began competing at age 11 in the Factory Stock division on Kansas dirt tracks, hopes to be in contention again this weekend. He said the team learned some things in their first trip to Wheatland with the B-Mod.

“The track has some character,” Walburn said. “We didn’t expect it to slick off like it did, real fast, in the heat races. They tilled it up before the feature, which was fine. We could have done a few more things to get the car better.”

Walburn followed in the footsteps of his dad, Brian Walburn who drove Modifieds during his racing days. Krew moved from Factory Stocks into a Midwest Mod and wound up driving both divisions the same season as Humboldt Speedway.

“It went pretty well and we finished second in points (Midwest Mod) and third in points with the Factory Stock,” Walburn said, noting his goals this season are to win Rookie of the Year honors at Humboldt and finish as high as possible in USRA B-Mod national points.

The large B-Mod car counts at Lucas Oil Speedway should help his cause in the national points. Last week, he drove from 10th to fourth in his heat race, which gave him enough passing points to earn a good starting position for the feature.

“The A Mod competition is pretty stiff, but it seems us B-Mod guys bring more of a car count now unless it’s a big USMTS event,” Walburn said. “I’d like to crack the top five in national points. That would be a good accomplishment.”

With five top-five runs already to his credit at various tracks this year, Walburn is making a name for himself. And speaking of names, what about his unique one of Krew?

“It is kind of a unique first name,” he said. “When I went to the Wild West Shootout two years ago in Arizona, one of my sponsors, he started calling me ‘Krewster.’ After that, a lot of people have been calling me that.”

"Krewster" attends Flint Hills Technical College and works for his dad’s roofing business, keeping his schedule busy. He wouldn’t mind following in the footsteps of Emporia’s biggest racing name. That’s Clint Bowyer, who Krew has gotten to know over the years. Flint Hills Towing, owned by Bowyer’s dad Chris, is one of Krew’s B-Mod sponsors along with Clint Bowyer Racing.

“Clint says work hard for what you want to go after. He’s an amazing role model,” Walburn said. “He made it from dirt racing here in Emporia and took it to the next level. He’s been really supportive.”

“They feel like family to me,” Walburn said of Jackson, the six-time Lucas Oil Speedway track champion, and the J2 team.

The Hermitage Lumber Late Models, Cedar Creek Beef Jerky USRA Modifieds and the O’Reilly Auto Parts USRA Stock Cars also will be in action Saturday night and Pure Stocks will be on the program as a special guest class, running for $300 to win.

It's part of a big day-night racing doubleheader coming to Lucas Oil Speedway as during the day, the first of four UTV Short Course Off-Road Racing program on the speedway's Off Road course is scheduled.

Spectator gates at Off Road will open at 9 a.m. with practice at 10 a.m. and heat races starting at noon on the off road track. Classes in action will include Pro N/A, Pro, Youth 1000, Youth 570, Youth 170 Mod, Youth 170 Stock, Sportsman, Women’s and Mini Stock Truck.

Other event dates are scheduled on July 23rd, August 20th and October 15th. Lucas Oil Speedway General Manager Danny Lorton said points will be earned at each event in each class with champions crowned after the Oct. 15 event.

UTV Off Road drivers can check out the rules & registration forms on the Driver Dashboard portion of the Lucas Oil Speedway website.